At 20:29 on 08 Dec 2017 both fire engines from Newton Abbot were mobilised to a Carbon Monoxide (CO) alarm sounding.

The occupier had correctly exited the house and was waiting outside. Two crew members dressed in BA investigated with a gas detector.

They found there was a small reading on the gas detector. We checked all around the log burner and did have constant readings.

CO is a colourless, odourless and tasteless gas produced by the incomplete burning of carbon-based fuels.

We decided to extinguish the log burner before re checking. During this we noticed a metal bucket on the hearth and needed to use it. It was full of ash, so we took it outside to empty it. Whilst doing this we noticed it was warm. We held the gas detector over the ash and it immediately went into full alarm mode.

We disturbed the crust on the ash and the embers below were hot and orange. The reading on our monitor increased from 129 PPM to 378 PPM (parts per million). Headache and nausea is caused after 1-2 hours of exposure. Life threatening in 3 hours. Symptoms can be found on one of the pictures.

The occupier empties the old ash from the log burner into the bucket regularly but does not take it outside until its full.

The embers were producing CO into the lounge which caused the CO alarm to sound. Luckily for this person they had an alarm!

Please do not leave ash/embers inside your property, remove it to a safe place in the open air immediately after cleaning.

In the pictures you can see the Watch Manager holding the gas detector just above the ash, with the lights flashing and the reading of 378 PPM.

We checked the log burner inside before leaving which had a reading of zero, confirming the bucket of ash as the source 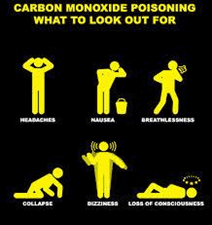 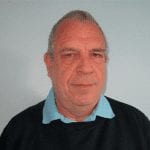 
Providing professional solutions for your Health & Safety issues, keeping you legal and insurance compliant, in a no nonsense manner. Specialising in Fire Risk Assessments, PAT testing, H&S systems and more. To let us take away your worries, contact us now. Your Safety in Secure Hands!
Telephone: 07846 475600 Email: cliveankers@svbg.co.uk
More information